The tourist trail in Laos is pretty well beaten, but much less so in Houaphanh province, located in the far northeast near the border with Vietnam. The main attractions there, beside the mountainous terrain and temperate climate, are the caves of Vieng Xai, where Lao communist leaders and thousands of villagers hid for 9 years under heavy U.S. bombardment during the so-called Secret War. I visited in March and immediately fell for the town. There isn’t much to do there besides visit the caves, but I noticed a little school with a sign made of computer paper—Phomvilay English & Computer Training Center—so I knocked on the door and asked if they needed any help.

The school was struggling, and enrollment had fallen to about 30 students. The owner, Makesouvanh Phomvilay, seemed optimistic even as he lamented that local people sometimes don’t share his belief that English fluency leads to better job opportunities. I ended up staying 3 days and helping him in a few different ways. We visited the local government-funded schools and did a dog-and-pony show to generate interest in his program. I also recruited 4 tourists from Surrey, England, to help out in the classroom. It seemed plausible that a steady flow of tourist-volunteers could help jolt the school out of its doldrums, and the kids would benefit from the pronunciation practice and inevitable confidence that comes from speaking with foreigners. I promised Make that I’d return to Vieng Xai and volunteer for a month, with the primary goal of promoting the school to other tourists.

I kept my promise, but things were more complicated than 2 months earlier. Rainy season was in full swing, and the district was undergoing nearly 2 weeks of daytime electricity cuts. On the positive side, enrollment doubled when Make put the word out that a foreigner would be teaching at the school. The Level 1 students were the most enthusiastic—they started showing up 2 hours early for class. Make and I eventually settled on a form of tandem teaching—he would present the new grammar and vocabulary in both English and Lao, and I would jump in to drill pronunciation and to test whether the students understood the new concepts. The Lao education system is based on rote learning, so it took a lot of coaxing to get the students to produce English on their own rather than merely regurgitate it during pronunciation practice. I also tried to introduce stricter lesson planning, classroom discipline, and time management—but it would take more than a month to make any real progress on those fronts.

During my last week in town, the school held a student certificate ceremony in the front yard. With a budget of about $50, Make rented a big tent and bought some food and beer, and the students did all the meal prep and service. Among the invitees were the village chief, the district vice-governor, a police official, and several local businessmen. The district vice-governor gave a long speech in Lao, punctuated by several nods in my direction. I found out later he was stressing the importance of having more foreigners involved with the school, but I'm not sure if he meant it. Perhaps we were a little ahead of the curve in Vieng Xai, which still has a generation of people who remember living in caves because foreigners wanted to kill them. Make eventually closed his school, got married, and found a good teaching job with a mining company in the capital. And I still get emails from around the world asking how tourists can help teach ESL in Laos.

There are two other excellent opportunities for ESL volunteers in Houaphanh province: 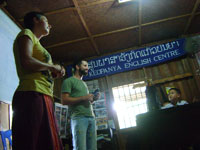 Keopanya English Centre is located in Sam Neua, the provincial capital of Houaphanh. For many tourists, Sam Neua is the gateway to Vieng Xai—located about 25 km away—and it’s certainly the only place to find Internet access and good Indian food. Keopanya is run by Mr. Khamkeo, a bright, dynamic teacher who pushes his students to speak English and not just write it down in their notebooks. I visited 3 of his classes on a Friday evening, and was joined by 2 other tourist-volunteers: Colette (from South Africa) and Vinko (from Croatia). Our experience with a handful of Level 3 students was brilliant. We divided them into 2 groups and helped them discuss a specific topic: Should cigarette smoking should be allowed in public places? After 15 minutes of discussion, each group had to sit at the front of the classroom and present their proposals (e.g., designated smoking areas, fines for violators) and Vinko listed them on the whiteboard. Two of the students in my group had been very timid during discussion time, but they shined during their presentation. Hats off to Mr. Khamkeo for not allowing timidity in his classroom. Keopanya English Centre is easy to find—it’s across the street from the Internet shop. More than likely, Mr. Khamkeo or one of his students will find you first. 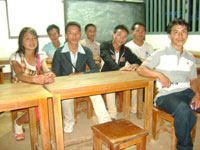 orks at the Vieng Xai Caves Visitor Center and speaks English very well. His day begins early—5:00 am—because he also teaches English to a dozen students in nearby Phou Xay, a Hmong village located a short walk from Vieng Xai. I visited Mr. Bounmisay’s classroom a couple of times during evening sessions and drilled vocabulary via a lively game of Pictionary and taught the students how to tell time. Their abilities ranged from beginner to obsessed. In fact, the father of Mr. Bounmisay’s most enthusiastic student is worried that his son is letting other school subjects slip because all he wants to do is study English. Ask for Mr. Bounmisay at the Vieng Xai Caves Visitor Center and get ready to fall under his gentle, friendly spell.